The government's idea to ban all mind-altering substances is obviously one of their more outstandingly stupid ideas in a long winding queue of stupid ideas eagerly waiting to have their stupid arses autographed by King Stupid, but for all that I really don't like messing with my own brain too much, since it does a good enough job of messing itself up on its own. Nevertheless, yesterday was the first time in my life I have ever had a can of Red Bull to get me safely home on the motorway. That in itself will give you some idea of my sad, sheltered little life - but also how gloriously knackering this weekend was.

It got crowded. It was always going to get crowded. All the same, the queues for the lifts and stairs got so long that Olympia's staff opened the big freight elevators to ease the congestion (although they were probably already being used to get the wrestlers up to Level 3), one of which opened directly in front of us writers. Not the nice, well-behaved writers from YALC - the Young Adult Literary Convention just around the corner. Us lot. The fringe. The gin salesmen and Beano artists and teachers who were taking a break from being nice to teenagers for the summer holidays. I almost felt sorry for those con-goers as the big corrugated iron doors opened like the Atmosphere Processing Station delivering Ripley into the Aliens' nest, to be met by me waving my tez gun and Kit Cox hollering 'Welcome to the second floor! Fresh meat! Fresh meat! Fresh meat!'

Frankly, I'm amazed we sold anything.

No, I'm not. We're fucking awesome. Everybody is. Writing is the best job in the world - it's just that when you're cooped up in the shed, scribbling away and convinced that your writing sucks but driven to do it anyway because of Reasons, you forget that the only people more awesome than writers are readers, and every so often you get a chance to go into the real world and actually meet some of them. Someone tweeted me just today and said that she thought I was the 'most genuinely excited' person there. I joked that it was extreme fatigue and caffeine, but in retrospect I don't think so. It's like 'Holy shit, these people are actually REAL? You mean it's not all in my deranged attention-seeking imagination?' If you're lucky, they buy your book because they like your work. Or they just pity you. I'll take pity; I'm not proud.

But yeah, basically my brain is fried. I wasn't even going to write this. Christ knows how many typos there are in it (please don't tell me). Still, I might take a wander down the shed in a bit and see what's going on. 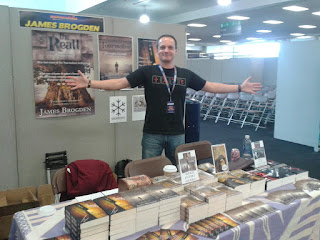 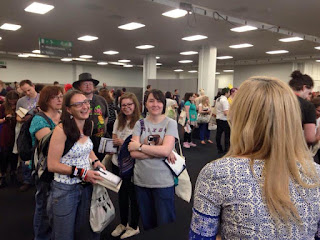 Me standing in a queue for a really GOOD writer, trying to look all cool and nonchalant. First prize if you can work out who it is.
No comments:
Email ThisBlogThis!Share to TwitterShare to FacebookShare to Pinterest
Newer Posts Older Posts Home
Subscribe to: Posts (Atom)