There's a Lot of Conning About

Didn't anybody stay at home this weekend? There was FantasyCon2015 in Nottingham, MCM Comic Con in London, and Showmasters Film and Comic Con Cardiff, while at the NEC you had your choice of the BDIA Dental Showcase, the Dive Show, and the Supreme Cat Show... something for everyone, especially if you're one of those people who like to cosplay as a scuba-diving cat-dentist, and let's face it, who hasn't at one time or another?

Me, I was at FantasyCon, and it was great. For most of the time I hung out with Iain Grant and Heide Goody (they of the fiendishly hilarious Clovenhoof series), but manage to catch up with some old friends and put flesh to some I've only met online ('put flesh to' is probably not the best choice of words, it wasn't that sort of con, but whatever). Jim 'Ginger Nuts of Horror' McLeod is exactly as lovely as he comes across on his blog. Jenny 'The Copper Promise' Williams looked slightly shell-shocked when I was wittering on about wanting to set up a franchise of the Super Relaxed Fantasy Club in the Midlands, but by that time I was on my second bottle of Newcastle Brown Ale to armour myself against a nightmare book-reading I'd foolishly signed up for. Sorry Ms Williams.

Four people turned up to my reading - three of whom were Iain, Heide, and her husband Simon. The fourth was Cardinal Cox - poet-in-residence of the Dracula Society - who was a lovely man but really only in the room because he was on after me. 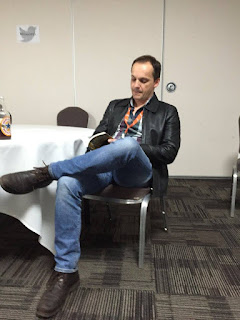 I was on a panel about world-building, sat in on all the ones about the arcane secrets of marketing and how to get an agent and discovered that the answer was the same as it ever has been, which is to just bloody work your socks off, like that advice ever helped anybody. Sunday morning's panel on Religion in Fantasy was disturbingly well attended, but then given the prices of the drinks maybe not that many people could afford to be horribly hungover.

Yeah, there was that thing with the food. Still, I had a great curry in Beeston and discovered the student union food outlets at Nottingham Uni are pretty good, so there was that.

On Saturday evening there was a tribute to the late and very much missed Graham Joyce. It turned out that a number of folk had taken this off down to the pub, which is presumably what he would have wanted, and those of us who were left paid our respects in Conference Room 1. During the sombre and thoughtful proceedings, Joe 'Horns' Hill was passing by outside, saw what must have seemed to him a deeply introspective group therapy session and responded in the only appropriate way - by launching himself drooling at the window like something from the Walking Dead. We reckoned Graham would have approved of that too. When Lee Harris discovered that the 'official' event had taken itself off-piste, he very generously bought drinks for those of us left, of which I'm sure Mr Joyce would most definitely have approved.

I didn't know him at all well, and it's only quite recently that I've got myself into this writing gang, but I thought that I'd have more time to get to know him better. That's the danger, isn't it - thinking that we've got all the time in the world, and we just don't.

So I've booked a place for next year's con at Scarborough, and I've got my bucket and spade ready to build some sandcastles against the tide (you can see where this metaphor is going, can't you?) and even though I got a rejection from a publisher today, it doesn't matter because in the meantime I'm just going to write as many stories as I can. At the end of the day, it's all you can do, isn't it? 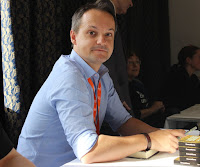