On Friday last week I finally got to meet my Doctor after nearly 40 years. No, this is not a reference to the grievous state of the NHS – although the way things are going it might not be very far off – just a lame way of saying that I met Tom Baker and got his autograph at London Film and Comic Con. 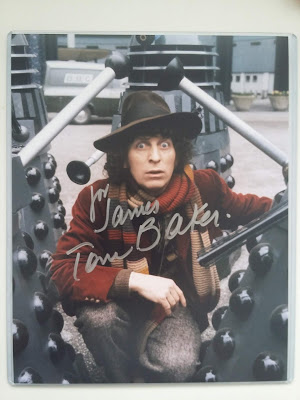 There are some stories and images from your childhood that haunt you and never leave. Here are a few of mine from Baker’s tenure as Dr Who:


And all this before I was ten. Is it any wonder I write what I do?

I think for me, though, and maybe for a lot of other people, the 4th Doctor’s greatest moment has to be when he is given the opportunity to wipe out the Daleks at the moment of their creation. He kneels with two bare wires in his hands – the fuse for an explosion – and hesitates, torn between his mission to destroy evil and his conscience which tells him that this act, however justified, is morally wrong. I think it’s worth copying in full here:

“Just touch these two strands together and the Daleks are finished. Have I that right? You see, some things could be better with the Daleks. Many future worlds will become allies just because of their fear of the Daleks. But the final responsibility is mine, and mine alone. Listen, if someone who knew the future pointed out a child to you and told you that that child would grow up totally evil, to be a ruthless dictator who would destroy millions of lives, could you then kill that child? Do I have the right? Simply touch one wire against the other and that's it. The Daleks cease to exist. Hundreds of millions of people, thousands of generations can live without fear, in peace, and never even know the word Dalek. But if I kill, wipe out a whole intelligent lifeform, then I become like them. I'd be no better than the Daleks.” 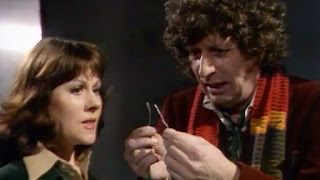 Eventually he is spared from this dilemma by news that Davros has offered to make peace, so he drops the wires and moves on.

The message is pretty obvious – unless you’re ten in which case it’s a mental tac-nuke. The idea that you can commit evil by destroying evil? Or that evil might create good? Or even that what you think is obviously evil might not be evil at all? The missiles are in the air, folks. Kaboom. It was the first time that I was really conscious of thinking (not that I put it in these terms, of course, I was a kid) that the greatest evil of all was not a monster but a sense of righteous absolutism, the idea that your cause is so right, your ideas so pure, so holy, that absolutely any act is justified and sanctified by it.

I say this because for years at London Comic Con I’ve seen countless female Whovians cosplaying as their hitherto male heroes, but for the first time this weekend I saw loads of male fans dressed as Jodie Whittaker’s 13th Doctor. And it was brilliant. She won’t be my Doctor, not like Tom Baker was, but for thousands of ten-year old boys and girls in 2018 she will be theirs, and they will want to emulate her, and that is a wonderful thing.

The problem is that there is a vocal minority of dipshit male Whovians out there - a lot of them from my generation, sadly – who are absolutist in their conviction that a woman can never be the Doctor. If you’re one of them reading this, here’s my message to you: drop the wires, mate. Move on. You’re undermining everything that your Doctor, whoever he was, stood for.

Me, come October I’m going to watch the 13th Doctor and try to remember what it felt like to be ten again. 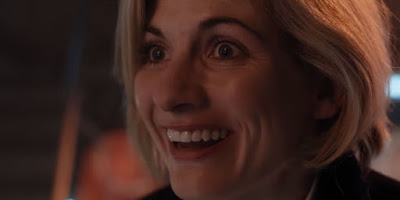 No comments:
Email ThisBlogThis!Share to TwitterShare to FacebookShare to Pinterest

Well, Valentine's Day has been and gone, and Easter is just around the corner, which must mean that it's time for a bit of annual book-pimping.

I've got a new book out, in other words, and this makes me a happy camper.

It's called 'The Hollow Tree', and it's about a woman called Rachel who loses her left hand in an accident but discovers that her hand won't die that easily - despite the fact that it's amputated and incinerated, she can still feel things with it. Not things in the living world as we know it, but things in the shadow realm on the other side; the place where dead things go. More than that, she discovers that she can bring fragments of the umbra through into reality. Just scrap, really - bits of broken glass,  dead leaves, insects and such.

Then, one day while out for a walk with her husband Tom, she finds a large hollow tree in the umbra, and a human hand reaching out for help from the hollow - a hand which grabs onto hers and won't let go.

It's based on a local unsolved murder case called the 'Bella in the Wych Elm' mystery which, if you haven't heard of it, I'll post in more detail about later. All I wanted to say for the moment is that the book's out from 13th March on Amazon, or the 6th if you get it from Foyles, apparently, and that there's a launch party at the Birmingham Grand Central branch of Foyles on Saturday March 17th from 6:30 - 8:30; it's open to the public and you're all invited.

I guarantee it will be at least as much fun as those guys are having in the photo.
No comments:
Email ThisBlogThis!Share to TwitterShare to FacebookShare to Pinterest
Newer Posts Older Posts Home
Subscribe to: Posts (Atom)