Here's One I Prepared Earlier

Hello, what's this?
(Blows dust off lid, opens it. Hinges creak. Something falls off.)
Cripes, I haven't been in here for a while. Look at the state of this place.
(Clears cobwebs out of the corners. Something small and scuttery scuttles away.)
Sorry about that. Let me offer you something by way of apology for keeping this blog so badly. How about a free scary story for the Hallowe'en season? Here's one I prepared earlier. 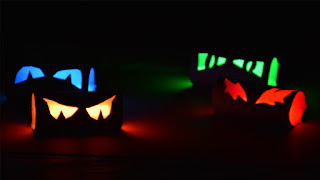 Taken from the website: A Hundred Amazing Activities to Put a Spook in Your Hallowe’en!

What you will need: the cardboard tube from inside a toilet roll (microwave it for 30 seconds for hygiene’s sake); a disposable glow stick, the kind you snap and shake to activate; scissors; tape; somewhere to hide your fiendish creation!

How to make it: cut two spooky eye holes in the side of the cardboard tube. Activate a glow stick and put it inside. Seal both ends with tape. Now place it somewhere it is sure to be seen in the dark, such as beneath a bush or, if you don’t have an outside space, under a bed.

Take your Hallowe’en party guests on a tour of your haunted house, telling them to beware of the bloodthirsty creatures lurking in dark corners!

Mary shut the back gate behind her and walked up the garden path towards the house, enjoying the damp chill of the October night. Around her the silhouettes of trees and bushes were dimly visible in the streetlight from the alleyway, and scattered amongst them were dozens of slitted, glowing eyes. They gleamed at her from behind the swing set, underneath the decking, and even halfway up the hedge. She chuckled. Jon and the boys really had done an excellent job.

She unlocked the back door and stepped into the kitchen, then stopped, puzzled.

She flicked the lights on, dumped her bag on the breakfast bar and crossed to the sink to fill the kettle.

‘You guys are amazing!’ she called. ‘It looks fantastic! Really spooky out there!’

It had been a late shift at the hospital so she’d left them to get on with it. As a stay-at-home dad, Jon was always good with the boys when it came to craft activities, but this year he had excelled himself. It was odd, though – normally Ed and Tim were throwing themselves at her knees by now. Mary left the kettle to boil and went through into the living room, expecting to find them glued to Paw Patrol, father included.

The lights were off in here too.

Maybe they were upstairs. Still, the standing lamp behind the settee should be on.

A small whimpering noise came from the direction of the dining table.

As her eyes adjusted she saw the table covered in loo rolls, packets of glow sticks, scissors and tape. Crouched underneath, safe behind a cage of chair legs, were her husband and sons, their eyes wide with terror. It looked like Jon had a hand clamped over each of their mouths.

Mary laughed. ‘Oh sure, right, nice one. You almost scared me, you lot.’

Jon shook his head violently. ‘Shh!’ he hissed. ‘Keep your voice down! And turn the bloody lights off!’ It was hard to tell, but it looked to her like little Ed was actually crying.

‘This isn’t funny any more,’ she told her husband. ‘You’ve had your fun, made your spooky things, now get out from under the table and stop sodding around.’

‘You don’t understand,’ he whispered hoarsely. ‘We haven’t made them yet.’

Mary ran back into the kitchen and looked through the window again, but the bright glowing eyes – the ones that she had walked straight past only a few moments ago – were gone. The only thing she could see was the reflection of her own fear-stricken face staring back at her, swimming in the dark. Then she heard the cat flap rattle and bang, and They swarmed into the house.

PS: You can actually make these. Here's the link. It seems only fair since I nicked their picture.